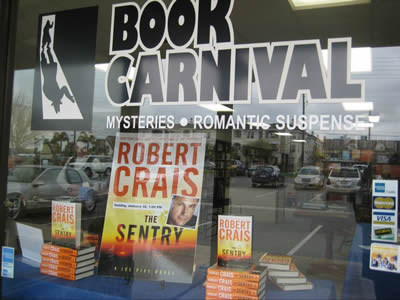 I’ll be making another sortie out of the Burrow to appear at Book Carnival on Saturday, 13 February, at 3:00 p.m.

Book Carnival is an increasingly rare bird: an independent bookstore that specializes in mysteries and thrillers. Anne, the owner, supports independent authors as well as those who have contracts with legacy publishers. She hosts events with big-name authors such as Craig Johnson, Robert Crais and T. Jefferson Parker, as well as with less well-known people like me.

I’ll be appearing with thriller writer Steven G. Jackson, a fellow Pure Fiction League and LIT UP! Orange County alum. We’ll each read from our latest works and interview each other about what we do and how we do it.

Admission is free (but, of course, we [and Anne] would like to sell some books). Book Carnival is located at 348 South Tustin Street in Orange, CA. Come join us!