We’re used to seeing the Islamic world’s women as victims. From old-fashioned discrimination to rape, torture, mutilation and murder, it’s tough having two X chromosomes in some of the more regressive Moslem states, especially in the Middle East. But in the developing long war against the Daesh (or ISIS or IS or ISIL, take your pick), we’re seeing a quiet new narrative that Doha 12’s Miriam heartily approves of: women fighting back.

Exhibit A is Mariam al-Mansouri, a major in the United Arab Emirates Air Force, who on 22 September 2014 led (!) Gulf State airstrikes against the Daesh in Syria’s Idlib, Aleppo and Raqqa provinces. An F-16 pilot since graduating from Khalifa bin Zayed Air College in 2007, the Abu Dhabi native has said she’d dreamed of being a fighter pilot for years before women were allowed to enter flight training.

While the Emiratis aren’t nearly as ideologically hard-over as their neighbors – we won’t see a Saudi female fighter pilot anytime this century, given that their women aren’t allowed to drive or even leave the house without a male relative – the UAE isn’t exactly a feminist paradise. It’s still perfectly okay for a man to beat his wife and children to “discipline” them, there are no laws against marital rape, and numerous women (including some Westerners) have been jailed for committing extramarital sex after reporting rapes. But that the Emiratis even considered having a modern, well-spoken woman as the face of their air offensive shows that green shoots can grow in even the stoniest ground.

Besides, we Yanks don’t have much room to feel superior: Jeannie Leavitt, the USAF’s first female fighter pilot, didn’t get to climb into her first F-15 cockpit until 1993.

Even more remarkable is a feature of the ground war against the Daesh: female peshmerga.

The top third of Iraq has been an autonomous Kurdish nation since Saddam’s fall in 2003, with its own government, schools, military, and, crucially, oil. Until the Daesh came on the scene, Kurdistan was the most peaceful part of Iraq. However, this calm is a recent development; the Kurds fought not only a bitter civil war in the 1990s, but also a decades-long guerrilla war against Iraqi security forces while Saddam tried to wipe them out.

The Kurds learned what other nations (USSR, 1941; Israel, 1948) have: when your back’s against the wall, you can’t afford to waste resources, including those women who want to fight for the nation. As a result, Kurdish women have been in combat since at least the 1970s. 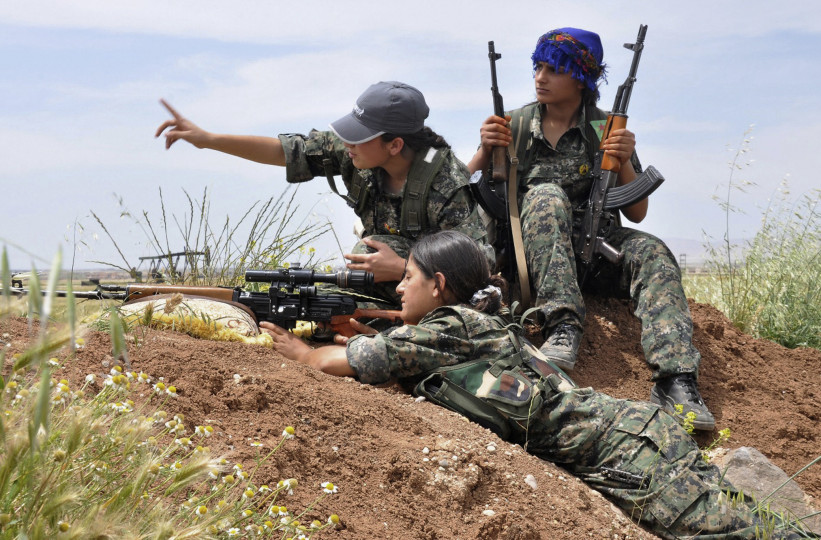 Second Battalion, Sixth Brigade is a 600-strong, all-female infantry unit in what’s essentially the Kurdish Army. Established in 1996, 2BN has served rotations along the 650-mile front the peshmerga hold against the Daesh. Like other Kurdish solders, the women of 2BN also staff checkpoints, train, and fill other non-combat roles. But the unit fought against Ansar-al-Sunnah in 2002, in the 2003 operation clearing the Iraqi Army out of Iraqi Kurdistan, and at least a platoon of female soldiers were on the front line of the September peshmerga counteroffensive against the Daesh in northern Iraq’s Daquq district, supported by U.S. and allied airpower.

Senior officers in the battalion are veterans of the fight against Saddam Hussein in the 1970s and 1980s. The female soldiers go through the same training as the men, share a base, and are paid the same as their male counterparts. And on 11 October, Rangin Hamlawa showed that the women can die like the men; she was killed in a mortar attack near Kirkuk while fighting the Daesh, the first member of 2BN to die in battle. Female fighters don’t exist only in the formal Kurdish armed forces. Two major guerilla groups – the Kurdistan Worker’s Party (PKK), banned in Turkey and listed as a terrorist organization, and its Syrian counterpart, the People’s Protection Units (YPG) – maintain armed militias. Up to 40% of their members may be women. Female YPG partisans (the YPJ) fought in the recent liberation of Kobani (see the video).

Like the UAE, Kurdistan isn’t a paradise of female equality. Some women wear niqab (aka burqas), and honor killings are enough of a problem that 2BN runs a network of safe houses for women at risk. It’s hard telling what would happen to 2BN if Kurdistan turned into Switzerland; both the Soviets and Israelis took their women off the front lines after their moments of crisis passed.

Still, it’ll be hard to shove Kurdish women back into a box. 2BN is limited to 600 soldiers, but more women come by their base to volunteer every day, and some go through training and head for the front as part of militias. I’d like to see some guy try to tell them they can’t drive by themselves.