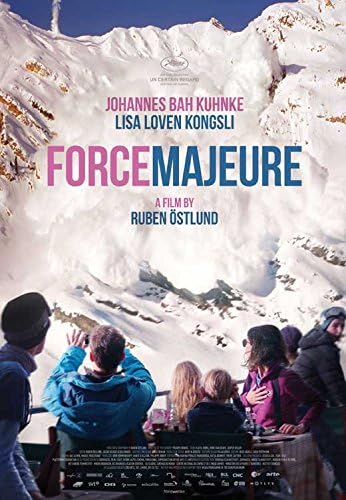 Pour one picture-perfect, upscale Swedish family into a luxe ski resort in the French Alps. Mix in a controlled avalanche that goes out of control, during which Tomas (Johannes Kuhnke), the man of the household, acts in a less-than-heroic manner. Stir vigorously and watch the nuclear family implode. That’s the recipe for Force Majeure, Sweden’s entry for this year’s Best Foreign Film Oscar.

Director Ruben Östlund keeps the camera focused mercilessly on Tomas, wife Ebba (Bridget Moynahan-lookalike Lisa Loven Kongsli) and their two blond moppets as the ripples from Tomas’ freakout wash the foundations out from under what was an already-shaky relationship. Kuhnke and Kongsli are convincing enough as a married couple that watching their growing conflict can be as uncomfortable as it would be in real life. Their kids are kids, not the short grownups usually portrayed in movies, and react in ways real kids might to their parents’ pain.

There’s little physical action but plenty of emotional warfare. The film is full of bruised silences and wounded looks and maimed conversations. Remember, this is from Bergman country — a lot of fun it isn’t. But if you’re looking for an involving meditation on gender roles, familial duty and the use of electric toothbrushes as barometers for interpersonal conflict, this could be your film.